Over the years there’s been some debate as to whether there are any cardio benefits while performing kettlebell swings. That’s understandable as most of us relate cardio to exercises such as running, biking, and of course jumping jacks. Most definitions pertaining to cardiovascular exercise include any activity that raises your heart rate while using various muscle groups repetitively. The kettlebell swing absolutely uses a ton of different muscles but do they affect the heart significantly? That is the purpose of this whole experiment.

How This Cardio Experiment Was Performed

The setup for this cardio showdown is quite simple. I recorded and monitored my heart rate for 2 minutes for each set of exercises. Since this is just a comparison between jumping jacks and kettlebell swings, only a set of each is necessary. However, I included an additional set of kettlebell swings using a heavier kettlebell weight to see what effect that might have on my heart rate if any. Thus, this experiment features 3 total sets.

In order to remain as consistent as possible, I made sure that my starting heart rate was somewhere in the ’90s for beats per minute. It’s not a perfect setup but is close enough to show differences between each set without compromising the data. At the end of the 2-minute mark, I took snapshots of each result which will be posted below.

When the idea popped in my head to compare the cardio effects of jumping jacks to kettlebell swings, I already had everything necessary for testing purposes. Most fitness enthusiasts probably have these similar items but if not they can be readily purchased:

There are plenty of alternative brands for kettlebells, fitness apps, smartphones, and HR chest straps. No special equipment is necessary. So if you feel so inclined as to run your own experiment you won’t have to plunk down a fortune. I would argue that formatting and showcasing these results for an audience was much more difficult than the tests themselves!

When I’ve done jumping jacks in the past I always set a number of reps to be performed. Usually, somewhere in the range of 25 to 50. Although I haven’t counted them, 2 minutes’ worth of jumping jacks typically yields around 100 reps. Honestly, those 2 minutes were a lot more difficult than I anticipated.

After reviewing my recording, I noticed that I was shifting ever so slightly to my left while doing this test. I suppose I underestimated just how intense jumping jacks are even for just a couple of minutes. The quick movements necessary for this exercise activate several muscle groups in the legs, arms, core, and others. I certainly felt relieved after those 2 minutes elapsed!

I found it very interesting to see a large jump in a short time for my heart rate. In the span of about 6 seconds, it went all the way from the middle section of the warm-up level to the low end of the moderate level. Essentially, the light zone was a blip on the radar. Does such a sharp increase put more stress or strain on the heart? If so, it can’t be too bad given the popularity of the jumping jack.

What was also curious to see was how my heart rate pretty much leveled off during the first half in the moderate zone. Then, it climbed to the lower 150’s beats per minute before finally breaking into the hard zone in the last 20 seconds. According to the experts, this isn’t necessarily a bad thing. People who exercise regularly should target 85% of their maximum heart rate for cardio. That would mean approximately 153 BPM with my maximum heart rate of 180 BPM.

Personally, I like to push myself and get the most out of my workouts. As long as I’m not climbing above my maximum level, that’s fine by me. I always listen to my body anyhow and if the workout becomes too much for my body or breathing, I’ll stop.

For the first set of kettlebell swings, I used my standard weight of 35 lbs. It’s my go-to kettlebell when I want a nice blended workout for cardio, strength, endurance, and more. It took some time to feel comfortable lifting and swinging 35 lbs. When I first started using kettlebells it was for weight loss and 15 lbs. was very challenging. Fast forward a couple of years later and my goals have now shifted towards toning and getting my body in the best shape possible.

One thing I’d like to point out is that I shot the video for each of the 3 sets back in March. Since then, I’ve made great strides to improve my kettlebell swing technique. Specifically, the hip hinge variation. What you see in the video is more of a hybrid style of the squat swing and hip hinge swing. Some people will insist that a kettlebell swing can only be performed correctly by hinging at the hips. That’s just not true. Depending on what muscles you want to target, a squat or hip hinge swing are both great exercises. 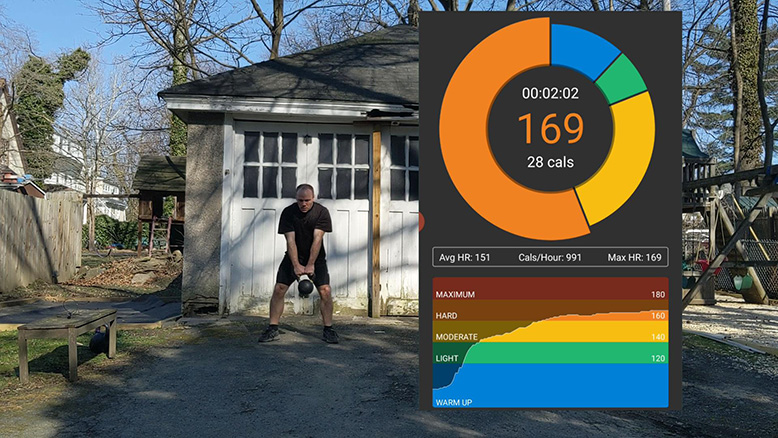 The graph you see above differs greatly from the graph of the jumping jack results. For one, it’s not such a steep incline from the warm-up to the moderate zone. Secondly, the majority of the time during the swings had my heart rate in the hard zone. During that time my heart’s beats per minute very slowly increased until reaching the mid-point in that zone.

Since the movements of a jumping jack and kettlebell swing take approximately the same amount of time, the number of reps during 2-minutes is roughly equal too. Therefore, it is fair to say that neither exercise is faster than the other when performed as intended. I think speed is an important factor because you don’t want an exercise that is difficult to maintain during your workout. Just imagine performing traditional jump rope reps in 2-minutes and then being tasked to doing double-unders in that time as well. Unless you’re trained for them, those double-unders are a lot harder to keep the pace.

Aside from the movements, the obvious difference between jumping jacks and kettlebell swings is that the latter has you using a weight. Thus it’s important that you’re swinging a kettlebell that feels “right” to you. You don’t want one that is so heavy that your muscles are strained, tired, or weakened after multiple reps. However, you also don’t want to use a kettlebell that is too light which won’t elevate your heart rate as it should.

It was absolutely more of a challenge to complete this set of kettlebell swings than the previous set of swings. The heavier a kettlebell is the less likely you can cheat your way through doing reps. What I mean by that is not using precise techniques or having proper form. There was a time when I relied on using my arms as the generating force to swing a kettlebell. I quickly learned that this wasn’t the correct technique after progressing through heavier weights! 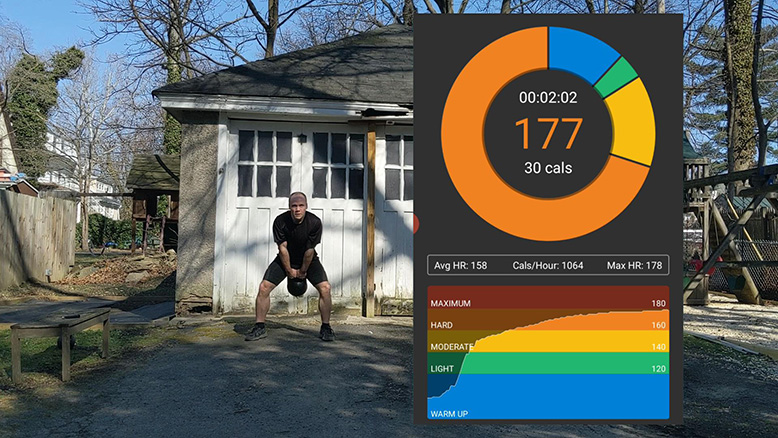 Nearly 3/4 of the set was spent in the hard zone for my heart rate!

What this graph represents to me is sort of an amplified version of the 35 lb. kettlebell swing results graph. The curvature is similar between the two except that my heart rate spent even less time in the moderate zone. At the end of the 2 minutes, my heart rate is near the max level peaking at 177 bpm. Clearly, this heavier weight had a noticeable effect.

Going from the warm-up level to the hard level in just 45 seconds is really astonishing. Of course, there are other ways to quickly accelerate your heart rate, but to do so at a steady pace? I believe you’d have to incorporate some sort of resistance training along with snap movements. That’s what makes the kettlebell such a unique fitness tool.

Side-by-Side Comparision of the Results 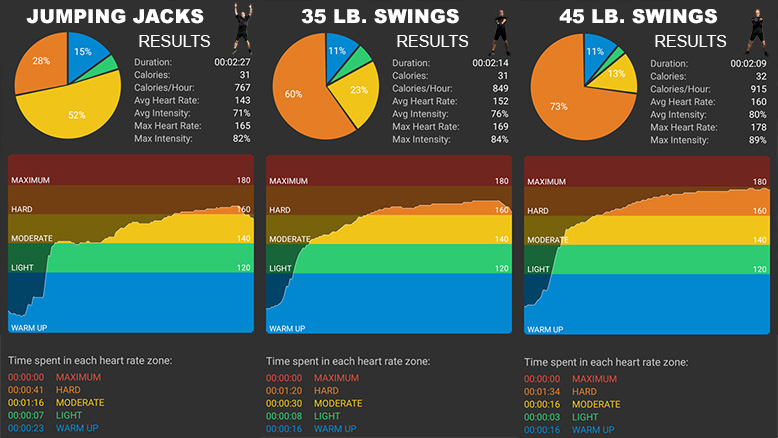 I think there is a clear answer as to whether kettlebell swings have any cardio benefits!

Are kettlebell swings good for cardio? At least after this test, there is no debate that they are. Don’t pay too much attention to the duration statistic as that’s just when I hit the stop button on the CardioMez app. After the 2-minute mark for each set, I completely stopped exercising. Sure, there is some data recorded after the fact (more so on the jumping jacks) but not enough to dispute the validity of this test.

Even if you took off 15 seconds from the moderate zone of jumping jacks, my heart rate was still in that zone for twice as long when compared to the 35 lb. kettlebell swings. Realistically, only the statistics that feature heart rate (avg hr, max hr, & intensity) are relevant. The data says that calories burned is the same but the app has no idea that I’m using weights during sets 2 and 3. It’s likely that I’m burning up to an additional 20 calories per minute due to kettlebell swings.

Which Exercise is the Best?

In my opinion, this isn’t a valid question to ask. There are many factors in play such as your fitness level, goals, and equipment available. Kettlebells are extremely portable but when it comes to bodyweight exercises all you need is a little motivation. My intention with this experiment is not to shame jumping jacks or call them inferior, rather, dispel the myth that kettlebell swings are not a good option for cardio.

One of the reasons that the swing is my favorite kettlebell exercise is because of its versatility. You can work on strength building, cardio, flexibility, and endurance just with this one move. The swing is also a beginner exercise and doesn’t require a person to be in tip-top shape to perform. So if you want to add a little extra oomph to your cardio training, get yourself a kettlebell and start swinging away!

Is It Possible To Turn Fat Into Muscle?

Raising The Dead – A Kettlebell Challenge