Preferred over the American Kettlebell Swing by many fitness experts, the Russian Kettlebell Swing allows for shorter and faster movements. Instead of swinging the bell from between the legs to above your head, the peak of the swing is at chest level. It is the original version of the kettlebell swing.

The general consensus against the American swing is that it relies too heavily on your shoulder joints. There is a concern with stability and keeping your grip as the bell peaks over your head. This shouldn’t scare anyone off to the American variation as it does provide a greater range of motion. However, from a workout standpoint, the Russian swing is considered superior.

It certainly requires more continuous arm strength. Your arms won’t get that brief momentary break when the kettlebell is directly overhead. That’s not necessarily a bad thing. You want to challenge your body and make it work extra hard to get the benefits of burning more calories.

This exercise is part of the Stack 52 kettlebell exercise playing card deck which is available here.

Create Your Own Kettlebell Workout Every Day
Shuffle Stack 52's Kettlebell Exercise Cards and set a timer for 20 minutes!

THIS EXERCISE IS FEATURED IN: 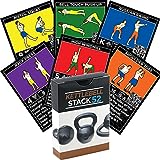