It’s been a long time coming but after spending several months with my 35 lb. kettlebell, I was finally ready to progress to the next level. I had already decided that I wanted to go with a competition kettlebell. Partly because that’s what all the serious lifters are using. However, it’s mostly due to my desire to stick with a kettlebell that is the same size. I’m not referring to weight, but rather the shape and dimensions that competition kettlebells must adhere to.

Don’t get me wrong, I still love my traditional kettlebells. In fact, if you’re just starting out I would recommend them over competition kettlebells. They’re more affordable and the smaller size of the lighter weights, I imagine, are less intimidating to newcomers. For myself, I want to continue with kettlebells that increase in weight but don’t compromise the handling. Personally, I’d be happy maxing out with a ~53 lb. kettlebell. I really don’t see myself working out with those massive monster kettlebells. At least not in the foreseeable future.

Given these criteria, I narrowed my options down to two choices: The Kettlebell Kings 45 lb. Fitness Edition or Kettlebell Kings 44 lb. standard competition kettlebells. Both are similar in price, although, there are a few cosmetic differences between the two. In this review, I’ll be addressing those as well as referencing my 35 lb. kettlebell for comparison.

51 Reviews
Kettlebell Kings Fitness Edition
If you have used barbells, think about when you train with plates that are all the same size regardless of weight so your form is always the same during Olympic lifts. Competition Kettlebells are the same premise in kettlebell form. This model is ideal for fitness and bootcamp settings which utilize a lot kettlebell swings, Turkish Get Ups and have wide bases for push ups and dips on kettlebells.
View on Kettlebell Kings

I’ll begin by noting the more drastic differences between this fitness edition kettlebell and the regular Kettlebell Kings kettlebell. If you can’t tell by now, I’m a huge fan of the brand. There are other high-quality and premium brands to choose from but few offer the same level of customer service and appreciation that Kettlebell Kings does. That’s a big factor for me. Ultimately though, price, is one of the considerations of mine when making a purchase. In that regard, their competition kettlebells are close to that of rival brands.

The first major difference between this kettlebell and a traditional-style one is the construction. Instead of cast iron, a competition kettlebell is made from steel. This presents a much smoother surface and is especially noticeable on the handle when gripping. Speaking of the handle, the squarish frame allows for better hand insertion than the tighter trapezoid-like window of normal kettlebells. This is an important feature for me as I enjoy incorporating two-handed moves like swings and deadlifts in my workouts.

Obviously, the shape of competition kettlebells is uniform in size no matter what the weight is. Regular kettlebells increase in size to correspond with the increase in weight. If your overall goal is to build strength then I suppose it doesn’t matter which style you select. However, functionality and movement are also important to me which is another reason for my current preference.

This Kettlebell Vs. Other Competition Kettlebells 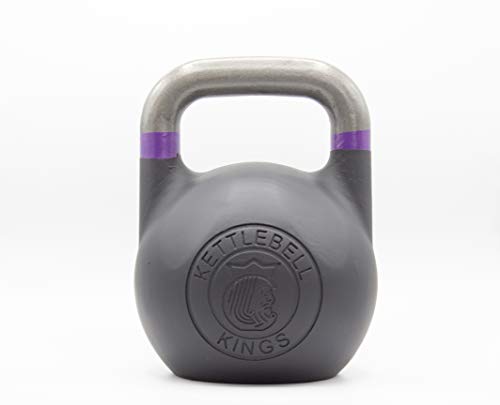 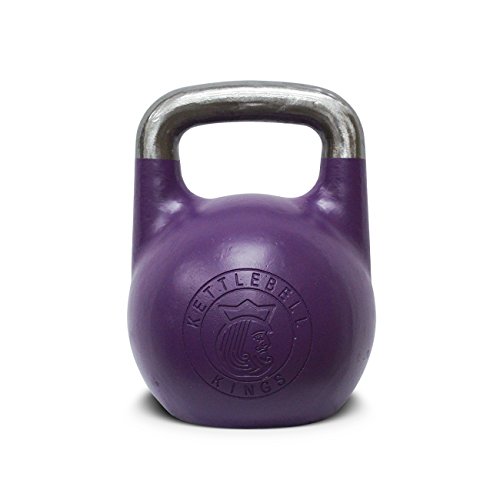 One of my main concerns with this fitness edition kettlebell was the fact that it uses filler. If you take a close look at the bottom of the standard competition kettlebell, you can see it has a hollow core. They are made completely from steel and how hollow the core is will depend on the weight. If you consider the following statement from Kettlebell Kings’ own product description, you’ll understand where I’m coming from:

“HOLLOW CORE, because our kettlebell is constructed from a single cast without fillers. This creates better BALANCE during lifts as most competition bells with welded bottoms and fillers can shift and rattle around with movement making it harder to complete your workout. If you see a competition style kettlebell without an opening in the bottom it is filled with sawdust and ball bearings or other fillers. These will unsettle over time and make the lift feel unbalanced.”

Despite this worry, I went ahead with the purchase based on feedback from members of a kettlebell training Facebook group. I’m happy to report that, during usage, I would be none the wiser that fillers were used. According to an answer to a customer’s question about this product, Kettlebell Kings mentioned that it is designed as a steel shell with tightly packed fillers. During exercises and movements, I feel no shifting or displacement within the kettlebell. My fears have been alleviated!

Some are hard to miss. I already mentioned the bottom which is flat on the fitness edition as opposed to having an opening. In all actuality, I doubt anyone is really scrutinizing the bottom of a kettlebell. What’s most apparent is the color of each. Your normal competition kettlebell has the base painted in a solid color denoting the specific weight. In the case of these two, that’s purple for 44/45 lbs. The fitness edition features two colored bands on the handle with a sleek black base. This actually might come down to preference but I like this look over a solid blanket of color.

What isn’t so obvious are the 4 distinct flat spots that surround the top side of the fitness edition kettlebell. For some clarity and understanding, I again turned to my online kettlebell training group who explained the purpose. In a sort of history lesson, it was explained that Russian lifter Valery Fedorenko designed his own kettlebells with such a feature for better comfort and position. This makes sense as no matter how you clean the kettlebell to rack position, one of those spots will rest on your arm. 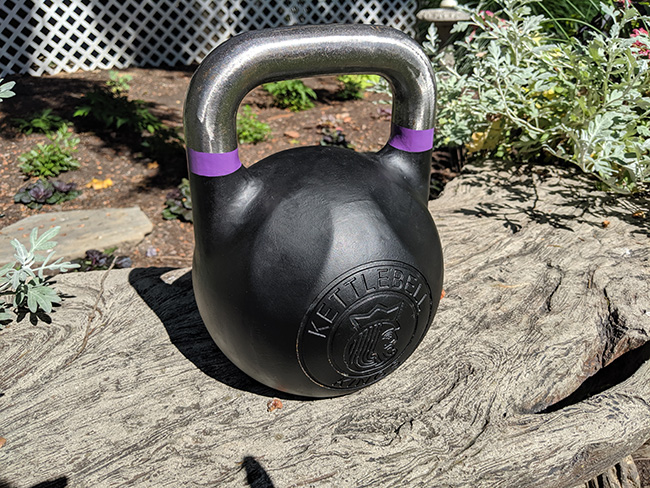 Two flat spots in the front and two in the back to help enhance comfort and positioning.

Do these flat spots really help with kettlebell training? Since I’ve never used a standard competition kettlebell before I can’t answer that question. I do think that it aligns with Kettlebell Kings’ targeted demographic. That being, people who aren’t overly concerned with compliance in kettlebell sport. Instead, I think it suits individuals who want a similar form and function to that of a competition kettlebell but are more focused on personal goals than competitive training. Which means it’s perfect for me!

Aside from that, the only other difference worth mentioning is the size of the window between the handle and base. While the handle diameter of each is the same at 35mm, the window of the fitness edition is slightly larger to better accommodate two-handed exercises. Since kettlebell sport lifters typically do one-handed exercises like the long cycle and snatch, a tighter window is more appropriate. Keep in mind that many such events are also done with two kettlebells at a time!

If you’re on the fence about choosing this competition kettlebell over others, remind yourself of what your goals are. Whether that’s to get in shape, lose weight, build strength, or work on a lot of two-handed exercises – you won’t be disappointed with the fitness edition. While a little pricier than its cast-iron counterpart, the sky is the limit as far as the freedom that is allowed.

As an example, look at what Roc T is doing with his fitness edition kettlebell. Listed as one of my top 10 Instagram accounts you should follow, he’s constantly creating new flows that are visually impressive but no doubt provide an effective workout. It’s like an art form of sorts!

The question you might be wondering is if I’ll invest money in another fitness edition kettlebell. That’s a hell yes! The only difficult choice I’ll have to make next time is whether to get another of the same size or go up a level to the 55 lb. However, that won’t be for some time as I have my work cut out for me getting adjusted to my new 45 lb. fitness edition kettlebell.

My Top 3 Obstacles During My Weight Loss Journey