It’s not enough that I participate in physical activities or events. Now that kettlebells are such a big part of my life, I’m always up for carrying them with me for an additional challenge. In September, I took my 25 lb. kettlebell on a hike up a mountain. It took every ounce of energy I had but I successfully ascended and descended the mountain clocking in around 3 hours total time and nearly 4 miles of distance. I figured walking a 5K with a kettlebell would be a breeze. Therefore, it made sense to up the stakes by bringing a heavier kettlebell for this flat terrain walk. However, after some consideration, I stuck with my 25 lb. kettlebell.

You’re probably wondering why I came to this decision. It was between that and my 35 lb. kettlebell. Ultimately, I still feel like I made the right choice and I’ll explain what factors played a role in my decision. But first, allow me to share my thoughts on 5K walks and what you should expect if you decide to participate in one.

Who Participates in 5K Walks and Runs? 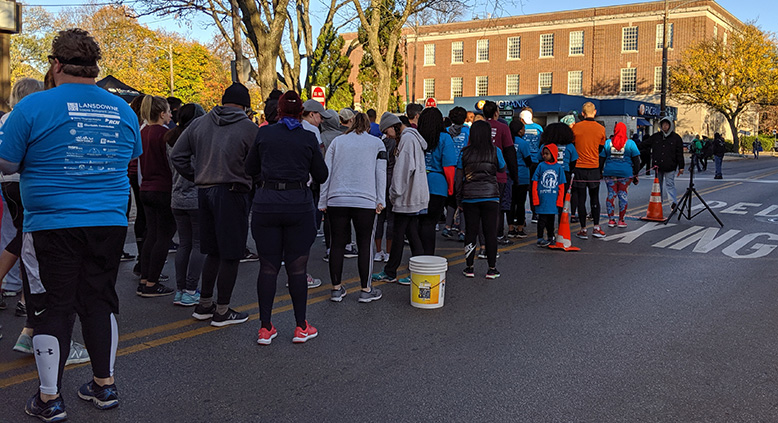 The participants are getting ready before the race starts.

Pretty much anyone that wants to! For this local event, there was a lot of diversity. Since this was my first walk-a-thon ever, I wasn’t sure how the competition would stack up. From my observations, there were 3 categories of participants – runners, joggers, and walkers. Of course, carrying a kettlebell, I wasn’t going to try anything stupid by running or jogging with it. That probably wouldn’t be the smartest thing and might even pose a risk to other participants if I tripped or fell. So I lined up towards the end of the crowd at the starting line with my wife who was also walking.

I expected to see a lot more runners make up the field but there was nearly an even amount of participants in those 3 categories. There were kids, groups of women aged 50+, families, even a woman pushing a stroller with an infant! Clearly, the simple act of participating was just fine enough for many people which was a bit of a relief. I don’t mind finishing towards the end, but something about finishing dead last just doesn’t sit well with me.

The organizers of the event did a great job setting things up and informing us newcomers how to prepare for the walk. Everyone was required to display a bib # (basically an id) regardless of their participation level. I was a little nervous when first arriving, however, after talking with several people it dawned on me that I wasn’t running a marathon. This was more about exercise and less about winning.

Do I go with the same kettlebell I hiked with or a heavier one? I had it in my head weeks and days before the event that I was going to use my 35 lb. kettlebell. It wasn’t until a few minutes before my wife and I left the house that I relented and chose the 25 lb. kettlebell. I’m glad I did as I don’t think I would’ve enjoyed it which would’ve severely detracted from the overall experience. The following few factors are how I came to that conclusion. 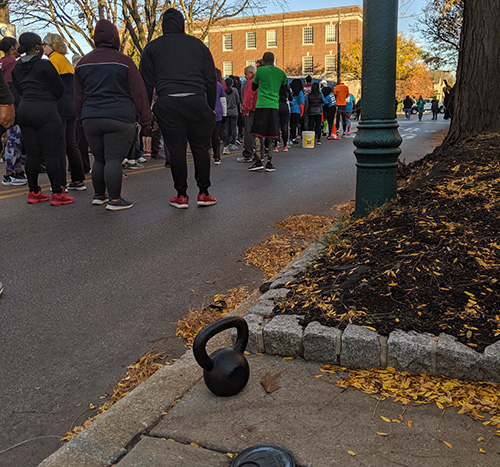 My 25 lb. kettlebell ended up being a good choice.

The day before the race was beautiful, sunny and in the mid 60’s℉. Less than 12 hours later, that following more, those temperatures plummetted to the low 30’s. For the first time all year I could see my breath! All that cold air makes for a very chilly cast iron kettlebell. My grip strength would be compromised and make 35 pounds feel heavier than usual. I suppose I could’ve worn gloves but that would’ve been a cop-out in my opinion.

I needed to get some chore work done and I didn’t want to be too tired after the walk. Most of the chores were outside too which further exposed me to the cold. While none of them were as intense as exercising with kettlebells, it would be a long day of light exercising of sorts. That adds up and with the hours of raking I did later, my arms were dead tired at the end!

While many participants drove to the event, I actually live within walking distance. It’s not too far but at one point there is a steep hill before the road flattens out leading to the starting line. If I had to guess, carrying my kettlebell to the event and back home probably tacked on an additional mile. At walking speed, that’s an additional 20 to 25 minutes of carrying my kettlebell. By the way, does anyone else think it’s strange that us Americans use the metric system exclusively for measuring distance in walking, running, or sprinting events? I suppose 3m might cause some trademark issues! 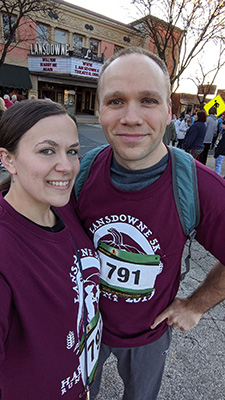 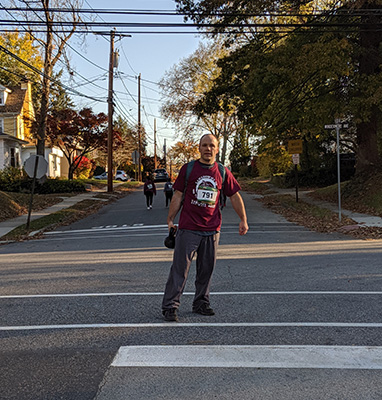 A big thanks to my wife for walking with me and snapping photos!

I brought my kettlebell for two reasons. One was to provide an extra fitness challenge and the other reason was to help spread awareness of kettlebells. I did have a couple of people approach me with a look of bewilderment. One woman thought I was a little crazy for bringing it along but I assured her this weight was light for me. I was hoping to get some questions as to why I brought it which would allow me to explain the many benefits kettlebells offer. That didn’t happen but at least everyone could clearly see me carrying it which surely had me stand out from the other walkers.

As the start time of 8:30 am approached people took their positions awaiting the signal. Lots of smiling, joking and good feelings abound. Then as soon as the starting pistol fired, those 3 groups of participants quickly separated. I was curious if anyone was going to come bursting out of the gate as they say – none did. Again, this wasn’t a high-stakes competition and the front runners paced themselves accordingly.

Walking with everyone else with my wife at my side was a great feeling. Sure, it was cold but I was extremely proud of us for getting up early on Saturday and doing something with our community. Initially, I wanted to limit the number of times switching the kettlebell between each hand. I believe I targeted just 4 hand switches but actually ended up changing hands 8 to 10 times. I didn’t keep an exact count but did my best to wait until every couple of turns at the street corners.

It wasn’t long until the runners and joggers were out of sight. Fortunately, arrows and staff members were strategically positioned to guide everyone where to turn. As far as excitement goes, my wife and I jockeyed for position between another group of walkers on several occasions. We were aided by the fact that one group of walkers went straight when they should’ve turned. We almost did too until we saw an organizer waving us in the correct direction. Lucky for that other group, we were still in shouting distance and directed them to the right path. 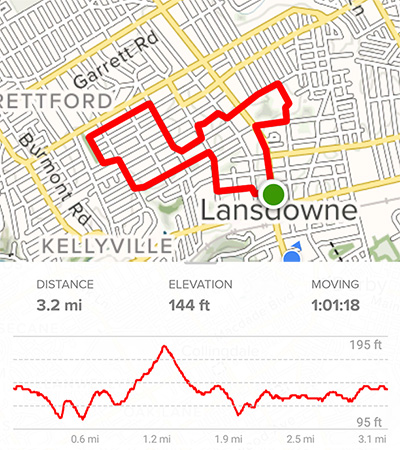 Our course route and completion time.

Our pace of average walking speed, ~3 mph, put us on track to finish around the 1-hour mark. As you can see from the photo above, the total completion time was a little bit over that. Unlike the hike, there was no resting that would interrupt our time. So it was more or less what we expected.

Towards the end, my hands and arms were slightly uncomfortable from holding the kettlebell. Mind you, I wasn’t miserable but I certainly appreciated my decision to stick with 25 lbs. A couple of the staff members at the street corners complimented me on this additional challenge and to my surprise even knew what a kettlebell was. It would appear that my goal of being looked at as the guy with a kettlebell wasn’t completely lost!

On the home stretch, we heard words of encouragement to finish hard and that we were almost there. That wasn’t necessary as both my wife and I were doing just fine but it was still nice to hear. As we crossed the finish line the rest of the competitors were already casually talking with one another. No doubt, waiting for the event to end and start the award ceremony. The few remaining participants soon followed us closing the books on this race for good.

Takeaways From My 5K Kettlebell Adventure

Will I do it again? That I’m not sure of. Another kettlebell hike is more likely. I did enjoy myself, however, I think next time I’d like to actually try jogging or even running. I’m a competitive person by nature and haven’t felt this fit in a long time. I have a little ways further to go but by this time next year, I should be in excellent shape.

Thanks to kettlebell training, I’ve gotten leaner, stronger, and more mobile. I haven’t completely made up my mind but I think once I hit my weight loss goal I’d like to focus more on cardio and running. I used to be a great sprinter as a kid. If I can get back to those roots but also incorporate some stamina and endurance, I believe I could really get top placement in the race results. I would’ve never thought this possible two years or even a year ago!

Is there a divide in the fitness community regarding kettlebells?

Outdoor Activities To Improve Your Muscle Strength And Endurance

Weight of the Bell: Essential Tips for Heart-Training