The 2021 Tokyo Olympics has seen the addition of 5 new sports to its games. These include karate, baseball/softball, surfing, skateboarding, and sport climbing. While I won’t argue the legitimacy of adding these sports to the Olympics, I am upset about the exclusion of another. Of course, I’m talking about Kettlebell Sport.

There are numerous kettlebell leagues and associations across the world that regularly hold professional competitions. Usually, athletes must perform as many reps as possible with a kettlebell in certain events. Such events might feature snatches, jerks, combo moves like the two-arm long cycle, and more. It’s a grueling experience where skill, strategy, and training come into play.

So why isn’t there any consideration for some sort of kettlebell event in the Olympics? Better yet, why isn’t there more of a discussion on the issue? The only question I found on this topic is from a 2012 Dragon Door thread. Most commenters chime in that a kettlebell competition would be too boring and too long for the average viewer. However, since when is excitement a requirement for inclusion?

Don’t Talk To Me About “Boring” 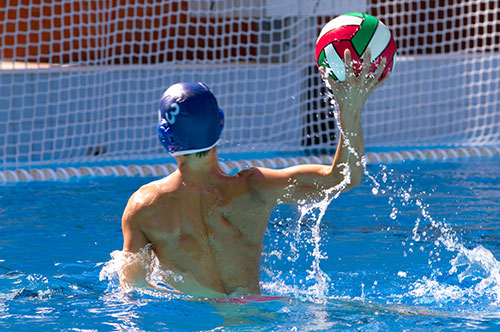 Recently, I happened to flip through some TV channels and saw Men’s Water Polo. Maybe, I’m in the minority but as I watched grown men throwing a ball around in a pool I found myself NOT entertained. Nor am I on the edge of my seat when watching cyclists cruising for hours and miles on paved roads. So if action is necessary, many of these Olympic games are lacking.

The point I’m trying to make is that the Olympics should not focus primarily on wowing an audience, but rather on skill & talent. In fact, if it were necessary, I actually have a solution for a kettlebell event that would certainly impress the average viewer. First, allow me to float my theory as to why the barbell is the only equipment used for Olympic weightlifting.

The World Has a Size Complex

The goal of an Olympic weightlifter is to lift the heaviest weight they can in either a snatch or clean & jerk fashion. They have 3 attempts for both moves with the best attempts combined for an overall result. Is it impressive when an athlete snatches over 200 kg. of weight? Absolutely! It’s a testament to sheer strength, albeit a quick one.

Let’s say this particular lifter successfully completed a total of 6 attempts of 200 kg. weight for both the snatch & clean and jerk events. That’s 1200 kg. or roughly 2,645 lbs. of total weight moved with breaks/rest in between. That’s no small feat and recognition is rightly deserved. By comparison, a kettlebell lifter will use a much smaller amount of weight but need to complete reps without any rest for that event. It’s apples to oranges or like comparing a sprinter to a marathon runner.

Making The Case For Endurance

Ivan Denisov, widely regarded as one of the best professional kettlebell lifters in the sport, has made some amazing accomplishments. The below clip summarizes his display of raw power and endurance in a 2017 kettlebell competition with a pair of 32 kg. bells.

As a guy who gives it his all when I use two 16 kg. kettlebells in 5-minute TALC session, I’m blown away by Ivan’s feat. Maybe that’s the thing. One needs to actually go through the motions to truly appreciate kettlebell sport. No, I’m not a competitor but when that burning sensation hits the muscles and grows after each rep – I understand. There’s a big mental game involved in kettlebell lifting and pushing yourself to finish the allotted time is exhausting.

The strategy involves a precise technique of balancing a load of weight appropriately in the rack position and setting the right pace. Start off too quickly and you might fizzle out at the end. The length of 10 minutes may seem short to those watching but feels like an eternity to the lifter. Boring you say? That’s an opinion that shouldn’t diminish the greatness of the sport.

If kettlebells are introduced into the Olympics, the aforementioned events demand inclusion. Although, why limit it to kettlebell sport? There are a couple of ways to implement kettlebells that would offer that razzle-dazzle sensation to viewers. They would need serious scrutiny with testing and programming. Although, if done correctly, I can see how the exposure would bring the world of kettlebells to a whole new legion of fans.

The CrossFit Games surged in popularity in the mid 2010’s, showcasing athletes’ combined prowess in strength, speed, agility, and overall fitness. Over the last couple of years, participation in these games has dropped significantly. That’s probably due to some poor decisions by the CEO at the time and of course the pandemic. However, there’s a definite interest in the way these events are structured and the ESPN-like presentation on TV helps add to the appeal.

A few years ago, one of those events called Fibonacci prominently featured kettlebells during the majority of the event. The moves were simple (deadlifts and lunges) but included some monster kettlebells which goes back to that size infatuation I wrote about earlier. CrossFit Games juggernaut Mat Fraser won that event handily as you’ll see below.

So if a major sports & fitness business such as CrossFit can use kettlebells in an exciting manner certainly the Olympics can as well. Perhaps a panel of experts should assemble to find the ultimate display of what those games embodied for a new and unique event. Instead of a set time limit, those competitors would finish in their weight class a predetermined number of reps for a particular kettlebell exercise as fast as possible. Then continue to a second stage of another kettlebell exercise and so forth.

The ironic part is that the kettlebells used for the CrossFit Games are not competition kettlebells. I suppose that would need to be the case as a 92 kg. weight just won’t fit in the required dimensions. Don’t worry though, my next idea for a kettlebell event is one that needs that conformity.

As you might expect, kettlebell juggling involves flipping and throwing the weight around in a spectacular fashion. It’s an art form I have no interest in trying myself but is truly mesmerizing to watch. I’m unsure of how many kettlebell juggling enthusiasts there are in the world. Enough to include it as an Olympic event? I sure hope so!

The first name that pops into my head when I think of this passion is Michael Lisichkin. A native of Israel and no spring chicken, what Michael does with his kettlebells earned him a spot on Israel’s Got Talent. Just take a look at some of his moves below!

I won’t pretend to know what any of those moves are called. Even if it is just freestyle I’m sure many of them are easily categorized. After all, if you think about figure skating, someone had to come up with all of those moves. If you also consider that artistic swimming was first introduce in the 1984 Olympics, it wouldn’t be a stretch to eventually include kettlebell juggling.

Let me just leave you with this final display of awesomeness by @daring101. This video came across my feed reposted by Kettlebell Kings. It’s hard to pick a highlight but the rolling across the back is a standout moment for sure! Keep in mind, that’s 12 kg. (25 lbs.) that he’s flinging around.

The Olympics Needs To Revamp Its Identity

The Olympics are in a ratings free fall. Many athletes and their sponsors seem concerned about their message rather than representing their country. So far in the 2021 Tokyo Olympics, there have been some surprising defeats (especially for team USA) where these competitors seem outright ashamed of their home country. Thankfully, that hasn’t been always the case. Tamyra Mensah-Stock is one of the few bright spots with her gold medal win in wrestling.

People want to watch athletes give it their all and be gracious about it. Not so much of the pre-ceremony gimmicks or podium speeches that leave fans divided. From my experience with the kettlebell community over the years, most enthusiasts and professional lifters are very humble. Ego’s are kept in check and politics are left out of the discussion as they should be. In my opinion, the Olympics would benefit from including kettlebell events just as much as the kettlebell community would benefit from the exposure.

Why Size Shouldn’t Matter When Working Out With Kettlebells

6-Pack Challenge – Week 4: Not a Success Nor a Failure