2020 is off to a great start as far as getting some big-time exposure of kettlebells from popular Hollywood actors and comedians. It was just last week when I wrote about Jimmy Fallon and John Cena’s hilarious kettlebell super bowl commercial. Now, as part of his Jablinksi Games Youtube series, Jack Black is looking to get ripped by using kettlebells. Celebrity trainer Mark Wildman teaches him several exercises as well as discussing their benefits.

The nearly 10-minute video is not just some fluff piece looking to cash in on the kettlebell trend. Rather, Jack is put through the wringer with a tough workout that is pretty impressive for a beginner. If the color-coding of the kettlebells used follows standard practice, it seems like he switches between a 25 lb. and 35 lb. kettlebell. For a guy who is 50 and overweight, that’s a lot of weight to be swinging around. It wasn’t all that long ago when I was huffing and puffing from using my 15 lb. kettlebell.

Anyways, thanks to Jordan Tyjeski for sharing this and bringing it to my attention! It’s worth the watch for inspiration and motivation alone. However, of course, Jack brings his usual charm and humor that I’m so accustomed to seeing in movies and on TV. Check out the video below and keep reading for my thoughts and insights.

At the end of the video, clearly exhausted, Jack comments on how his legs feel like spaghetti and that he isn’t sure if he’s built for this. That sounds about right! The beautiful thing about working out with kettlebells is that so much can be accomplished in short order. They offer an intense full-body workout that other fitness tools can’t. I really hope he sticks with it as I know first-hand how drastically they can change your life.

On a serious note, the beginning of the video talks about dieting and overcoming food addiction. I can relate to Jack’s desire of wanting to eat whatever, whenever. Mark suggests that getting into the exercise routine before becoming accustomed to dieting is the preferred method of getting into shape. I get the rationale behind that line of thinking and even agree with Mark’s assessment. Trying to get someone to break or curb bad eating habits is harder than having them start a new one (like exercise). However, I think this is the wrong approach.

I was happy to see Mark recommend intermittent fasting by saying that all of the food consumed should be done in an 8-hour window. That’s challenging on its own; the more important aspect of IF is that it shouldn’t be treated like a buffet opportunity. Don’t expect to make much weight loss progress if you’re still overloading on calories during that time. A calorie deficit is still necessary and that’s where using a tracker app helps.

Personally, I believe that getting through the mental hurdles of adhering to dieting and IF should come before exercising. I’m by no means perfect, but by stringing a week, 2 weeks or more without gorging myself I’ve achieved some incredible results when combined with exercising. I feel like exercising without any dietary restrictions is just setting yourself up for disappointment. I know that unhealthy eating has also affected my motivation for exercising too.

Kettlebell Exercises Featured in the Video

It was funny to see Mark and Jack interact about proper footwear attire for exercising with kettlebells. I agree and many trainers do as well, that barefoot is the way to go. It’s natural, comfortable, and as Mark proclaims, “You can tell much with what’s wrong with someone immediately the second you see their feet bare”. The exception of this ideology is when lifting kettlebells in a competition. Although I don’t see the problem, apparently health and sanitation issues are the primary concern. 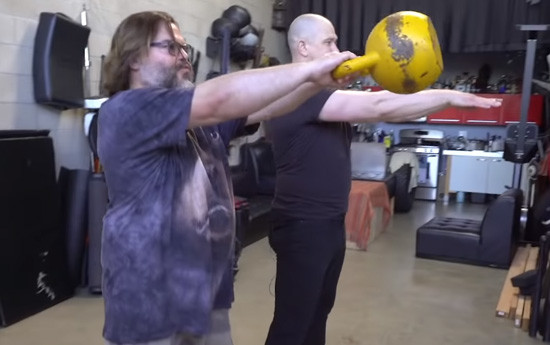 The first exercise we see is the kettlebell swing. I’m not going to get super-detailed and try to assume whether it’s the hip-hinge or squat-style that’s being taught. Truth be told, I’m still working on perfecting the technique for both (as well as eventually tacking pendulum/sport style).

For the first set, Jack is swinging the blue kettlebell (25 lb./12 kg.). He looks pretty amped up and ready to move on to a heavier kettlebell. The blue one is swapped for a light brown kettlebell which from my searching is pretty rare. The best guess is that it weighs 31 lb./14 kg. Finally, we see Jack finish with the most common weight kettlebell, the 35 pounder.

I like how Mark addresses the breathing pattern and how it changed when Jack started using the heaviest kettlebell. That look he has when asking if it’s a full hour of this is priceless! No, just 10 minutes Jack! An hour of swings even with rest periods should only be performed by the most experienced kettlebell enthusiasts or trainers. 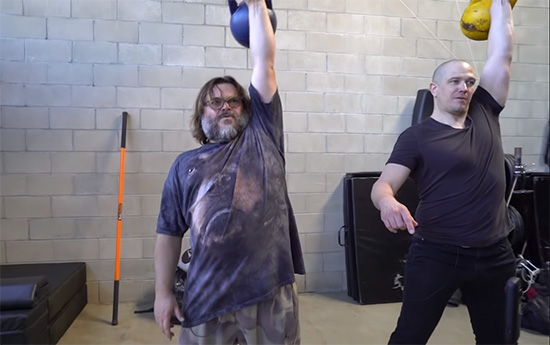 Another favorite of mine, the clean and press, is the next exercise that Mark teaches Jack. Gotta love the brutal honesty on display from Jack. The workout and exercises are starting to take a toll and he acknowledges as much. Stalling with jokes about the press, leaning on a wall – trust me, Jack, we all know your pain! 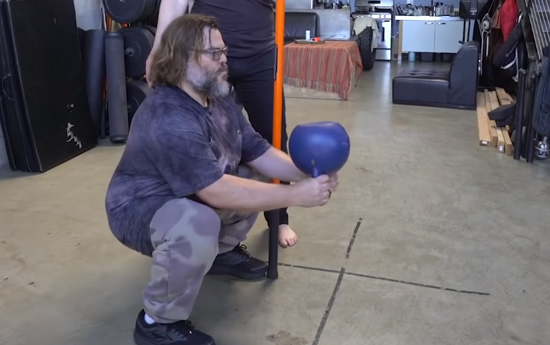 The final exercise we see Jack perform is the kettlebell goblet squat. I’ve watched many videos online that show the opposite way of doing this move from how I prefer. As you see in the video, I like to do these squats with the handle down and the bell on the topside. I don’t think there is a huge difference and neither is wrong or right.

One thing I did notice was how Jack has his arms extended away from his body when squatting. This makes it harder (not wrong!) than keeping it close to your chest and center of gravity. While I appreciate the benefits of the squat, I absolutely hate doing them! It’s a tough exercise and kudos to Jack for sticking with them.

Final Thoughts and a Personal Plea to Jack Black

After some cooldown moves, Jack discusses expectations and goals for getting in shape this year. The biggest priority to him is slimming down. He talks about his current physique of 5’7″ and 240 lbs. and getting that down to 215 lbs. That’s absolutely possible and won’t take that long provided he stays committed to dieting and exercise. I think he could take a step further and reach 185 or 180 lbs. with some hard work and patience.

Two years ago, at 5’7″ I was at my worst at 265 lbs. These days, I’m hovering at 170 lb. mark and have petty concerns such as building a six-pack. Jack, if you’re reading this, I implore you to stick with kettlebells! You joke about going toe-to-toe with the Rock. That might be a bit of a stretch but WHEN Jumanji 3 happens it would be quite the sight to see the both of you rockin’ ripped bodies. It is possible… and with kettlebells, you don’t have to spend hours a day in a gym getting into great shape.

This kettlebell workout looks easy enough but will test your endurance

Were all these workouts jack was doing ten min workouts per exercise?

I didn’t see it specifically mentioned anywhere by his trainer. That would be my guess though, between 5 and 10 minutes for the different exercises. Most likely in an EMOM or Tabata format.