Super Bowl LIV, featured some crazy commercials which shouldn’t come as surprise. However, this is the first time I can recall that kettlebells have been giving such large exposure. I thought to myself, This is great!. Unfortunately, the end segment of this commercial has a comical yet unflattering finish. Give it a watch below and you’ll see what I mean.

After a few swings exercising with kettlebells, Jimmy loses his grip of the kettlebell causing it to come crashing through the fitness center storefront window. Glass shatters as the kettlebell bounces off the pavement and narrowly missing a couple of pedestrians. At that point, Cena proclaims that they should leave and the segment is over just as quickly as it began.

Yes, I laughed and I was amused. Although after it had sunk in a bit, I realized that this might send the wrong message about the dangers of exercising with kettlebells. In my two years of working out with them, I’ve never had one fly out of my hands from swinging. Not that it can’t happen, but it isn’t common at all. I have lost my grip when doing around-the-body exercises during hand transfers. However, that was due to wearing badly worn gloves and also using too heavy of a kettlebell for that exercise.

Is Losing Grip a Common Occurence?

I was curious to see what sort of internet chatter there were about kettlebells flying out of hands. Surprisingly, I only found this post from a Dragon Door message board. The original poster mentions his hands become slippery but that the kettlebell had yet to go flying. That’s the only instance I really found online about losing grip during the swing. There are a few posts about dropping a kettlebell which is much different than having it take flight across the room.

Honestly, unless something drastic happens while swinging a kettlebell such as a medical episode, the chances of losing your grip are extremely unlikely. Even with sweaty hands, you’ll notice your grip becomes less secure at which point you’d towel off your hands and kettlebell. That being said, I have a few observations from this 10-second segment I believe deserve mentioning.

Breaking Down This Kettlebell Swing Segment

The first thing I noticed is that the trainer (shown from a front view) is instructing John and Jimmy to perform American Style Swings. This is also known as the CrossFit kettlebell swing which requires the apex of the swing to be directly overhead instead of at chest level. Elitists will favor one over the other but I believe both the American and Russian style has a place in kettlebell training. I should add that I only do American Swings with smaller-sized kettlebells as it does make me a little nervous having large ones overhead.

From my perspective, it doesn’t seem like either of the guys are following directions. Their apex is neither overhead or at chest level. It’s somewhere in between. I’m guilty of this too from time to time where I overswing when it’s not necessary. However, that’s never the case when I perform American Swings. I just find it much easier to transition to overhead every time than a precise point at chest-level.

The second observation I have is that no gym or trainer in their right mind would have a class in that spot. Specifically, so close to the window and facing in that direction. For one, the small chance of what you see happening is enough to ring liability warning bells. Also, who wants to be on display like that for passers-by? I’m sure awkward glances would ensue from both directions. 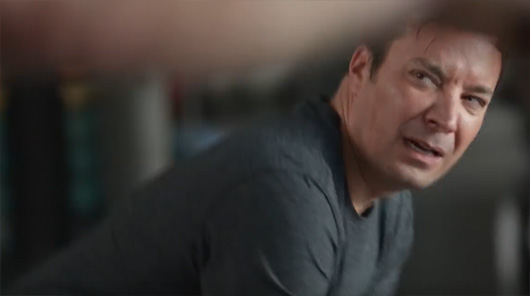 My final observation has to do with that priceless look of why am I doing this from Jimmy. I’ve been there too and it really captures that feeling when I first started exercising with kettlebells. There he is sweating his ass off while Cena looks like he is in pure bliss. It was a nice job of comparing how conditioning has paid off for the seasoned athlete while the regular guy struggles. The good news is that with time and effort, that regular guy can transition into a well-oiled machine much faster than conventional exercising.

Final Thoughts on This Commercial

Concerns aside, obviously the tone of this commercial is about humor. Out of all the fitness tools available, they chose to include a kettlebell. We’ll see if this translates into an uptick of people researching kettlebells. Regardless, it provided too good of an opportunity for me to pass up writing a blog post on! Other than the Mountain Dew Shining Commercial, it’s at the top of my list for favorites. More exposure to kettlebells at the expense of a quick gag isn’t a bad thing in my opinion!

A 15 Lb. Kettlebell is a Good Starting Weight for Out of Shape Men

Why You Should Really Care About Your Body’s Mobility