Two weeks into this challenge with two more to go and I am feeling it! What I thought would be an easy addition to my warm-up routines before my kettlebell workouts has proved challenging. I’m talking about the increase of ab wheel exercises from 30 to 50. That extra twenty reps of stretching out take a greater toll than expected. Although, I certainly believe it’s had a huge effect on my progress of building 6-pack abs.

What’s been the biggest surprise so far is that I seem to be at a standstill in regards to losing weight. Granted, I’m not too far away from the normal range for my body type and height according to BMI (Body Mass Index) standards. It seems very likely that the little belly fat I have remaining is being converted into muscle. I’m sure you’ve heard the old myth that a pound of muscle weighs more than a pound of fat. That doesn’t make much sense but I understand the idea behind this logic.

In actuality, muscle is a lot denser than fat. It’s more compact and not spread out like body fat. Therefore, the appearance of someone who is muscular is going to look slimmer than another person who is overweight at that same weight. Technically, both individuals would be considered overweight when using BMI as a metric. In my opinion, BMI is outdated and shouldn’t be taken into account for people who are working out. Especially folks who are exercising with kettlebells.

This Is Not A Weight Loss Challenge

When I started this challenge at the beginning of this month I thought I’d easily cruise to my goal weight of 163 pounds. Why such an odd number? Because that’s the maximum weight that BMI considers me to be out of the overweight category. Apparently, men who are 5’7″ should ideally weigh between 133 and 163 lbs. So for the better part of a year, I’ve been striving to hit that mark and I’m oh-so-close.

The truth is, I might not reach that goal at all. I find that extremely frustrating but when put into context, I really shouldn’t care about numbers so much. CrossFit Games superstar Mat Fraser is listed at 5’7″ and weighing 195 lbs. BMI tells us he is overweight as well as borderline obese. One look at his photos and you’ll see that he is anything but overweight or out of shape!

Thankfully, scientists have developed a new standard to determine body fat percentage which is called RFM (Relative Fat Mass). This takes into consideration one’s measurement around their waist as well as their height. So as I continue to work out and build my strength and muscle mass, I may actually increase my weight and that’s okay! I need to stop obsessing about the number 163 and instead just take a look in the mirror.

The goal of this challenge is to build abs, not hit a certain weight threshold. Whether I accomplish that at 150 lbs. or 185 lbs. should make no difference. Sure, having 6-pack abs will look nice and will ultimately result in the most sculpted body I’ve ever had. However, eliminating all of the excess fat in my stomach area will finally let me move on to other fitness goals. A strong firm core will allow me to do just that whereas I would be impeded with any belly fat.

Now that I’ve gotten all that weight-talk off of my chest (pun intended), it’s time to share the midway progress of this challenge. As I compare the photos of these latest results to those of when I started the challenge, it is difficult to see any noticeable progress. The front-facing photos look very similar to one another but change appears more apparent when comparing the side shots. There’s an indentation at the mid-section which wasn’t there before; it’s subtle but noticeable.

I have to believe that the past two weeks have been laying the foundation of what’s to come for building my ab muscles. These final two weeks I hope to be in more of a transformative stage where the definition in that area becomes quite clear. There very well might not be much of a difference when this is all said done. It won’t be for a lack of effort as I’ve been busting my ass with restricting my diet and regularly working out Monday thru Friday.

The exercise routines for the past week include repeating a couple of Tabata workouts, another Skogg System workout, and the super exhausting CTCF 100 challenge. That last one I did during an off-day for my wife and I had to talk myself into it! Diet-wise, I went over my self-imposed daily calorie limit of 1300 for the first time in this challenge. Not by much, and I doubt it will have any impact at all, but I like to be a stickler when it comes to following my own rules.

By far the toughest workout of the week was the CTCF 100 Challenge. That workout resulted in my highest average bpm by a wide margin and also a couple of ticks ahead for peak heart rate bpm. Any time I’ve done that workout in the past I immediately dropped a pound (due to water loss no doubt) when weighing myself before and after. This time, I barely moved the needle at all. Even though I’m sweating my butt off I must not be retaining too much water throughout this challenge. 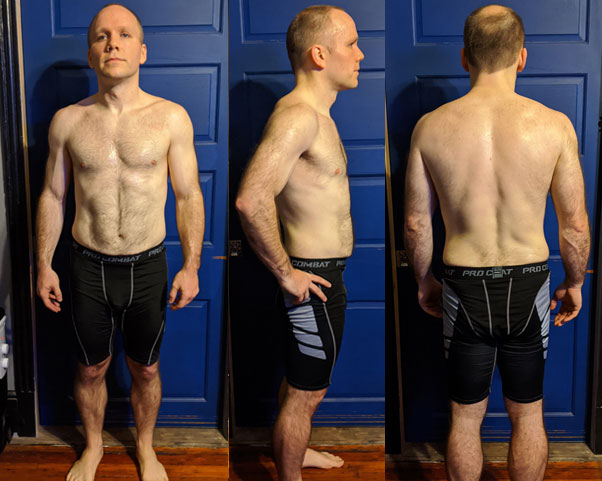 All this hard work has yet to yield incredible results. I still remain optimistic and although you can’t see much of a difference, it feels a lot firmer in my core area. As tiring as exercising is, it can’t compare to the willpower I need to not stuff my face from time to time. If anything, this challenge serves as an excuse for remaining strict on my diet.

Weight of the Bell: Essential Tips for Heart-Training