My apologies for the lack of updates on this website. On November 23rd, I married the love of my life and shortly after we spent 10 days in the Bahamas on our honeymoon. Specifically, we stayed at the Atlantis resort on Paradise Island.

I’ll be honest, the latter half of November was bad for me in terms of exercise and dieting. The week leading up to my wedding was spent making final preparations for the big day. While on honeymoon, my wife and I wanted to enjoy our time which included eating fatty foods and such.

While the resort did give us access to an on-site gym, we certainly didn’t come to the Bahamas to work out. We did, however, walk around the resort every day and did not take any shuttles on the main island. This coupled with lots of swimming, led us to believe that we would balance out the bad eating. Unfortunately, I gained around 10 pounds and will be working hard to trend back in the right direction!

Now with the wedding behind us, both my wife and I are eager to get back to dieting and exercising. In fact, I’ll be blogging daily this week with the challenge of losing those 10 pounds in just five days. The next post will overview this challenge and go into more details.

I did want to briefly share my experience in the Bahamas as well as comment on those kettlebells that probably see very little use! Overall, we had a great time. I’m sure it will be quite a while before we return, but it definitely lived up to our expectations.

Kettlebells in the Bahamas 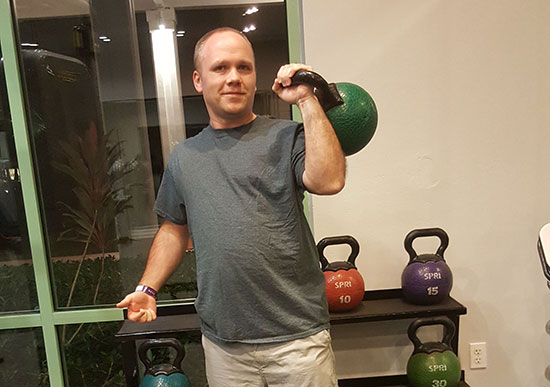 So here I am, in front of a set of very old-looking kettlebells. If you look closely, you’ll notice that the handle and the base of the kettlebell are two separate pieces. You’d be hard-pressed to find a kettlebell that isn’t single-cast for sale these days. Furthermore, the base seemed to be made out of rubber with two screws attaching the handle.

What also struck me as odd is how light the set behind me is. I believe it ranged from 10 to 30 pounds in 5-pound increments. Next to other bulkier equipment in the gym, I would expect to see kettlebell weights in the 35 to 60-pound range.

Still, I suppose I should give the Atlantis resort some credit. I never expected to see any kettlebells let alone a set of them. Kettlebells are slowly gaining popularity here in the United States. Perhaps if I return in 10 years that set will be upgraded to cast iron!

3 Positive Things During My Bahamas Trip

As I mentioned earlier, my wife and I had a great time. There were some annoying things (which I’ll detail in the next section), but it was the experience of a lifetime and one I’ll never forget. Below are a few of the best experiences I had.

It rained only one time out of our entire 10-day visit. That happened to be during the night too. The coolest the temperature ever got was around 72° F. That’s quite the difference from the freezing temperatures I returned to in Pennsylvania.

All of the Atlantis staff were very friendly and accommodating. This includes the hotel clerks, bellhops, vendors, waiters/waitresses, etc. The same could be said for the locals who were not a part of the Atlantis resort. Their laid back demeanor and personalities helped my wife and I feel at ease no matter where we were.

This is probably an obvious point, but it deserves some attention! We stayed at The Reef hotel and had a beautiful view of the ocean. Our suite had a very relaxing shower stall, eat-in kitchen, and several other amenities. We’d go out for the day and return to our room all set up again by housekeeping like it was brand new.

As you walk around the resort, tranquil music echoes from speakers along the pathways. During the day, it never felt crowded in the pools and on the beach. At night it felt like we had the whole place to ourselves while outside. Lights were perfectly placed along walkways, making for romantic strolls under the moon. It was beautiful!

3 Negative Things During My Bahamas Trip

It wasn’t perfect by any means. I have a few gripes. It won’t discourage me from visiting again. However, for people who might be planning a trip there in the near future, it might help to know these things.

For such a lofty resort you’d think that the wifi included with your stay would at least be adequate. Yes, there was coverage throughout most parts of Atlantis. No, I don’t expect the connection to be great in every location. Although in our room it should be stable and steady.

Luckily I was banned from doing any work on my honeymoon (as everyone should be!). I couldn’t even if I wanted to. Websites were timing out and both my laptop and phone were dropping the signal from the resort WiFi. My wife’s phone also had horrible connection problems.

If you’re going to the Bahamas your main concern probably isn’t surfing the web. However, things come up. Such as our wedding photographer sending a link to the photos of the wedding day. What should have taken a half-hour browsing through them ended up taking a couple of hours.

Let me start by repeating what I said before. The staff was awesome. The tourists… not so much.

While a lot of the areas in Atlantis were too crowded, the main hub hotel, The Royal, has an adjacent casino which then connects to a bunch of restaurants and stores in the Marina Village. Unless it is the dead of night, it is always busy there.

The problem is that most tourists are rude. Children run wild, groups form a walking wall, and refuse to move to the side when opposing travelers cross paths. In a way, it is like rush hour traffic. People stopping abruptly in the middle of a busy hall. Selfie sticks swinging around like fly swatters.

Not everyone was like that. Some folks were decent enough to reel in their children and practice common courtesies. However, they were far and few between.

We found out after the fact that the VAT was raised in July from 7.5% to 12%. This is a tax that is added to just about every good and service in the Bahamas. Of course, prices are already inflated as it is.

A burger could cost you $20 without fries or a drink. Everything is expensive. That’s not a shock. Placing a tax on those prices seems a little excessive. However, that’s not the worst of it.

A 15% mandatory gratuity is also added to just about everything. That’s the case whether you have poor service at a restaurant or buying supplies from the hotel stores. When you add up these two fees you’re getting charged an extra 30% almost! Again, this is on top of already inflated prices.

Still Very Much Worth a Visit

Despite the negatives listed above, the Bahamas and Atlantis is still a place you should try to visit at least once in your lifetime. My wife and I will have a lot of memories there. We were fortunate enough to have an extended stay of 10 days.

Would it be worth it for a weekend excursion? Sure, if you can manage the flight time. For us, it was about 3 hours one way. If it were up to my wife we would never leave! But we have jobs and also some diet and exercise to return to!

The Best Kettlebells For Purchase By Price Per Pound