Despite the many benefits and muscles worked when exercising with kettlebells, very few NFL athletes are taking advantage of this fitness tool. Of course, the training necessary to compete at such a high level most likely demands a variety of equipment. Still, it is a little surprising that the kettlebell hasn’t become more integrated into NFL players’ workouts.

So in my desire to learn more about the connection between the NFL and kettlebells, I did some scouring. I searched players past and present who have mentioned exercising with kettlebells. Either in the form of videos or at the very least discussing them in interviews. Below is a list of several such players.

Moving from the Oakland Raiders to the Chicago Bears last year has not stopped Khalil Mack from dominating the opposition. The NFL has him ranked #3 in their list of top 100 players in 2019. Considering that this list is overwhelmingly consisting of offensive players, that’s no small feat. In fact, only 3 defensive players made the top 10 of that list!

So what’s the deal with Khalil and kettlebells? I found this article from Men’s Journal that included this snippet of information.

“My workouts start with a really good stretching session,” Mack said. “After that, I fire up some of my smaller muscles to get them ready for the next part of my workout. I love kettlebell workouts and pushing the sled—I’ve been doing a lot of that this offseason—along with heavy sets of pushups and situps.”

Yup, that’s all there is! I even browsed through his Instagram to try and find any image or video of him using a kettlebell. There was nada. Granted, he only has 133 posts but still has quite the following. Although, there’s this image pulled from that same Men’s Journal article of him possibly doing kettlebell curls. I’m sure he is in full-on game mode right now, but hopefully, he’ll share some more details in the near future about his workouts. 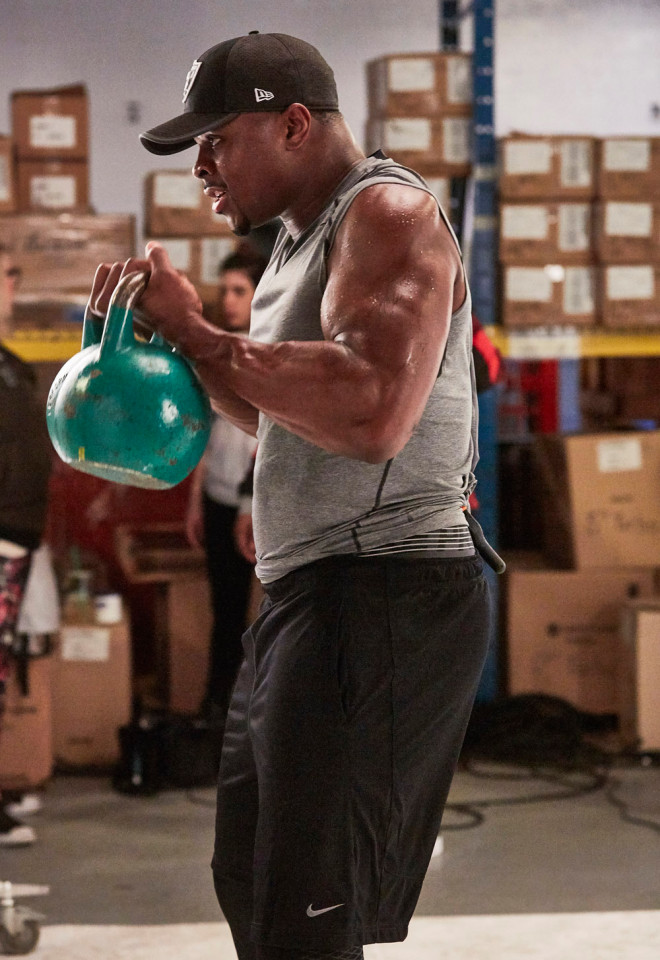 Some of you might recall the famous Beast Mode incident a couple of years ago where running back Marshawn Lynch steamrolled Jurrell Casey. After the game, Jurrell owned his mistake and said it felt like a shot to the heart when that happened. I say, don’t feel too bad. Marshawn has made a career of running through people!

Outside of that one play, Jurrell has had a very solid career. He’s been with the Titans since 2011 and has remained relatively injury-free. In the majority of his seasons with the Titans, he’s played 16 games. Otherwise, it’s been a few seasons with 15 games played here and there.

Jurrell’s kettlebell connection seems to have formed with the help of Titan’s strength and conditioning coach at the time, Tom Kanavy. Unfortunately, due to the NFL’s limited ever-changing video player, I can’t embed the workout showing the two of them. It appears that they’ve recently removed the clip of Jurrell using the kettlebell during his training.

Although he finished his career with the Cincinnati Bengals, his 9 seasons with the Green Bay Packers are what fans remember the most. Another reliable player, he missed just two games out of all games played during his tenure for the regular season. Perhaps kettlebell training aided in keeping his body in shape and avoiding injury?

These days A. J. can be seen working with Onnit and promoting their various products. No stranger to kettlebells, he’s even heavily involved with Onnit’s novelty kettlebells, primal bells. The video below shows A. J. doing several leg exercises with kettlebells. The most prominent being the split squat.

In the video, there’s also some narration that goes along with A. J.’s kettlebell swing movements around the 1:49 mark. Dubbed the partial swing, it’s explained that the power is generated from the hips and that the arms should NOT feel any stress. In the end, this strength circuit is detailed in written form should you want to try it out for yourself.

Drafted by the Houston Texans in 2009, Connor Barwin’s most productive years were actually with the Philadelphia Eagles during the 2013-2016 seasons. Perhaps his best performance came during Monday Night Football in Week 9 of the 2014 NFL season. During that game, he sacked Carolina Panthers’ quarterback Cam Newton 3.5 times.

Connor’s relation to kettlebells goes at least all the way back to 2012. That seems like a lifetime ago in regards to the modern kettlebell era. The video I’ve embedded below was shot during his time with the Texans and features a kettlebell swing circuit. It’s hard to tell from the angle but this variation of the swing is a little unusual.

I’m certainly not one to judge or critique other’s kettlebell moves, however, it appears as if the swing is somewhere between American and Russian style. The Russian kettlebell swing is where the kettlebell peaks at chest level with the arms perpendicular to the body. In the American or Crossfit swing, the peak reaches as high as the arms can stretch upward. What I see in this video is that the peak is at a 45-degree angle.

Regardless of his technique, this just might be the first recorded instance of an NFL player juggling a kettlebell. Sure, he’s only flipping it frontwards. However, that still requires some timing and coordination. Like the previous video, this one also has the workout listed in text form at the end.

Want a Chance to Win $50? Submit Your Kettlebell Video!