The kettlebell clean is an exercise with dozens of variations as detailed in Cavemantraining’s Master The Kettlebell Clean. In my opinion, it’s probably one of the most underrated kettlebell exercises and doesn’t receive as much acclaim as the swing, snatch, or press. This is likely due to the quick action of the move. However, in order to get the most benefits from the clean, it’s important to practice proper technique.

For the purpose of preparing for an upcoming kettlebell challenge I’ve organized in conjunction with Taco Fleur, we’ll be focusing on the dead clean. In this variation, the kettlebell starts in the dead position which means on the ground or floor. Because of this, it’s easy to make mistakes in regards to the lift that otherwise may not be as much of a problem.

Before breaking down the do’s and dont’s of the dead clean, please take a moment to review the following demonstration video.

In the above video, we see Taco performing several reps recorded in slow-motion at the side and front angles. There are a few things to note which are described in his own accompanying blog post. Perhaps the most impressive is how smoothly the kettlebell lands into the rack position. I know many beginners struggle with banging their wrists – something I do as well from time to time.

Aside from watching the movement of the kettlebell, it’s just as important to see how the rest of his body is positioned. Notice how Taco looks straight ahead when starting the lift. The head actually begins to move before the kettlebell does. During the drop is where his eyes follow the weight on its way back to the dead position.

Also of note is how the elbow remains extended and the arm is straight while the kettlebell is lifted. This is something I struggled with and was pointed out to me as feedback in the Caveman Inner Circle. I didn’t even realize my arm was bent and thought nothing of it at the time. It makes sense though. In order to achieve such flexion, you’ll need to squat further down than necessary.

What To Practice And Avoid In The Kettlebell Dead Clean 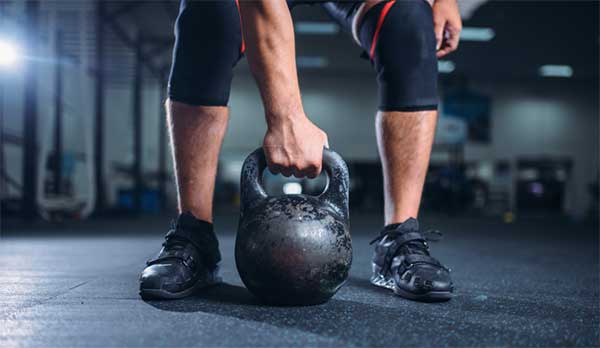 So you’ve read about head placement and keeping the arm straight. What other aspects of the dead clean demand attention? For one, understand that the lift is a squat movement and not a hip-hinge. Having the kettlebell placed between your feet instead of in front should help prevent that mistake.

There is no swinging action, only pulling directly up and dropping down. This will have the weight move close to the body. When practicing, I’d suggest sticking to a weight that you regularly use or lighter. As you progress, then move up to a heavier kettlebell once the mechanics are fully understood.

Another key point is that you want that explosive power generated during the pull. Going slow and/or pulling with the arms will certainly lead to fatigue quickly over multiple reps. By using the legs to power the ascent, the kettlebell will float briefly giving your hand time to adjust and catch it into a smooth rack position.

Finally, don’t try and rush the drop. This is something I’m guilty of as well when I want to fire off reps in rapid succession. Oftentimes, I’d need to reset the kettlebell between my feet as it landed further in front instead. Let gravity do the work for you which makes it easier to keep the arm straight on the descent.

What Really Makes The Clean A Great Kettlebell Exercise

As great as the kettlebell clean is on its own for working out, it makes for an excellent transitional move. Once in rack, there are a variety of other exercises you may choose to follow. Whether that is pressing or jerking overhead, dropping into a swing or snatch, or even just squatting in rack. The combos are limitless.

Speaking of rack, practicing the clean will no doubt make you more familiar with this vital resting point. Anyone who has performed in a kettlebell competition knows the importance of the rack. I recently read through the free Master the Rack PDF which explains why it is so important to perform correctly.

I still feel like the swing is my favorite kettlebell exercise. However, it’s not sustainable over a long period without rest. Compare that with the clean and if you perfect the rack technique, you can work out for many minutes on end without putting the kettlebell down. Certainly not easy, but as you’ll see in this 10 minute clean & jerk video, it helps build endurance immensely.

About That Kettlebell Challenge…

You now know that the dead clean is one of the exercises for this upcoming kettlebell challenge. What I’ll also reveal is that it will be paired with another popular kettlebell exercise as a repetition. Don’t worry, I won’t make everyone wait too much longer for all of the specifics. However, I wanted to ensure everyone has a good grasp on this important exercise because endurance is involved.

If you haven’t signed up for the challenge mailing list already and want to stay updated, make sure you subscribe by clicking this link. So far we have about 50 people who said they are joining. My goal is to have the same level of participation and enthusiasm that occurred last year in the kettlebell swings & burpees challenge. Thank you to everyone for your interest and I’m looking forward to seeing all of your challenge videos.

Improve Your Mental and Physical Health With These Life-Changing Tips