At the beginning of August, the team at Cavemantraining kicked off a 28-Day challenge that tasked participants to complete sets of burpees and kettlebell swings. While people were free to choose their own specific number of reps, the suggested goal was performing 50 burpees and 100 kettlebell swings. For observers, some questioned the intensity of such a challenge assuming that such a low number of reps requires little effort. While it’s true that it typically took less than 10 minutes each day for all the participants, the challenge was anything but easy.

I was fortunate enough to already be several months in my Lockdown Challenge which requires 100 kettlebell swings every day. So adding 50 burpees beforehand didn’t seem all that intimidating. However, I forgot just how stubborn and competitive I am. Not necessarily with anyone else (although I am to a degree!), but more so with myself and pushing towards improvement. I quickly learned just how exhausting performing large sets of burpees are. That being said, it’s my opinion now that they are one of the best bodyweight exercises for improving cardio!

Of course, I’m going to provide evidence of this by showing my beginning and ending results of this challenge. Although, personally, I came to appreciate much more than the health benefits during my participation. It was a grueling yet fun experience – one that was fueled by support and encouragement from others. Below are some of the observations which helped me cross the finish line and shave off nearly 1 minute and 30 seconds from Day 1 to my best time on Day 26.

A Challenge As Tough Mentally As Physically

Reviewing my video from Day 1 of the challenge, I’m shocked that I was able to complete 50 burpees in one go. Yes, there were some slight pauses here and there but no extended rest until moving on to the swings. I’ll never forget how I gassed I felt afterward. I badly wanted an oxygen tank and if you watch the time between the burpees and swings, I tried various techniques to keep going mentally.

Crouching is usually a dead giveaway of my exhaustion and I spent over 5 seconds doing that while gripping my kettlebell. The next stall tactic I employ for recovery is the side to side sway. It’s not something I do intentionally, and is a little humorous to me now, but helps to distract from the task at hand. By my calculations, I spent around 45 seconds recovering. Take a look!

Aside from my exhaustion, my technique of the burpee was not considered the CrossFit variation. Instead of touching my chest to the floor during the push-up phase, I touched my chin. That’s okay, after all, we weren’t being judged or anything. I wasn’t exactly following the guidelines anyhow since the recommendation was 50 1-handed swings per arm AND 50 CrossFit Burpees. The main emphasis is just selecting a certain amount of reps for each exercise and sticking to a variation of the swing and burpee.

Honestly, I didn’t think I would be able to sustain the pace of doing 50 burpees and 100 swings each day. Those 7 or so minutes might be a blip to people watching but for me, it felt like an eternity. My legs began burning midway through the burpees and it took all I could muster to power through them. This made the swings much more difficult because gone was the stability in my legs.

Then on Day 3, something strange happened. I actually felt a lot better upon completing the burpees. It’s almost as if my lung capacity greatly increased making for less recovery time. Not every day of the challenge did I perform 50 burpees consecutively. I tried to be smart about it and break them up into sets like 2 x 25. Still, I don’t think I had a worse time throughout than on Day 1. That’s pretty impressive considering the breaks between sets!

As I mentioned earlier, Day 26 featured my best time for the challenge. I felt like I accomplished everything I set out to do. The final two days were more so for just finishing strong and I didn’t want to rush too quickly and injure myself. It might be hard to tell from the video, but I also made every effort to touch my chest to the ground.

I may not have had the fastest time of all that who participated but that wasn’t the point. Instead, the goal was self-improvement and that’s what my next observation is all about. People of all ages, male and female, determined to push through and end up better off than when they started.

If I had to guess, there were anywhere from 30 to 60 people actively posting every day across Cavemantraining’s many groups and forums. They operate and maintain several Facebook groups, as well as Reddit groups. I typically only posted to the Kettlebell Training group throughout the challenge. However, just in that one group, I was able to watch dozens of people progress and improve toward their own goals. It was extremely inspirational and motivational.

What makes this group so unique is that there are no egos. Everyone had their own set of obstacles to overcome and certainly there were no winners or losers. The only comments I saw on people’s videos were words of encouragement. Some of the hardships shared by others pertained to using this challenge to rehab through injury. Others included how they decided on approaching their end goal. Below is just one example of a participant that showed the level of dedication they had.

I Have A Lot Of T-Shirts 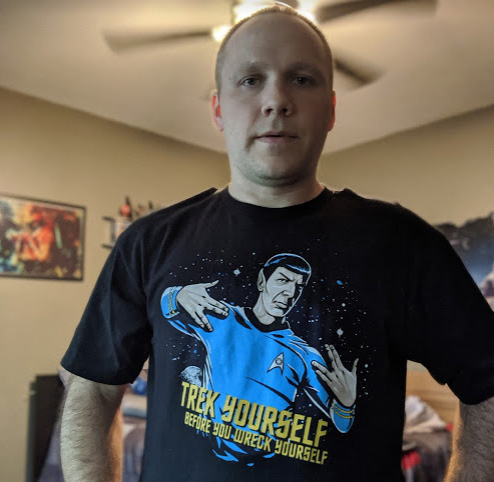 One of the many t-shirts I wore.

I wanted to keep things interesting for everyone else following along with my videos in the kettlebell training group. I decided that each day I would wear a different t-shirt with a short backstory. I probably went through my entire wardrobe and put on some shirts that I haven’t worn in over a year! It was fun though and I got a few comments from individuals who recognized the band, tv show, movie, etc. that was portrayed.

Early on in the challenge I actually wore a weighted vest but took my time with 5 sets of 10 burpees each. I debated on using a heavier kettlebell too, but as if he knew trainer and group moderator Taco Fleur posted a reminder that this isn’t about showboating. Endurance was key and there is no sense risking injury by switching to a heavier kettlebell.

My New Love/Hate Relationship With Burpees

The kettlebell swing is still by far my favorite kettlebell exercise. It’s quick and you can rack up the reps rather fast. My cardio experiment proved that the swing can go toe-to-toe with jumping jacks for elevating your heart rate. Burpees, on the other hand, are a completely different beast. Going from the floor horizontally, to jumping in the air vertically is extremely taxing on the body. Especially going at a steady and quick pace.

I hate performing burpees but the results of this challenge have helped me decide to include them in daily warm-up routines. I found that 25 burpees are the right amount for me to do without losing my mind. That’s just enough reps to feel the burn in my legs, work the lungs, and elevate my heart rate. Now that my fitness goal has shifted from weight loss to cardio and endurance, there’s absolutely no way I could neglect incorporating them into my schedule!

Challenge Yourself And Experience The Results

I would encourage anyone who wants to improve their cardio to give this challenge a shot. It may be over for the group but for less than 10 minutes a day, you’ll surprise yourself. I believe this would make an excellent training regimen for runners preparing for a marathon. The fire in my quads tells me that my legs get one hell of a workout and I’ve already discussed the lung capacity improvements. I’d bet money that those who are serious about running will see improved times in meets from Day 1 to Day 28.

I’d also go as far as to say that athletes in other sports like basketball and football can compete for longer. Even if you don’t play sports but are tired of feeling gassed after intense activities, you’ll experience the benefits. Use this challenge to supplement your training or exercise routine and you won’t be disappointed. Staying motivated and keeping yourself accountable is perhaps the most difficult aspect. Therefore, if you have friends who are into fitness perhaps try the 28 Day Burpee and Swing Challenge together. It’s was immensely satisfying!

Using Pre-Workouts For Pump And Vascularity

I’m on day 5 of this program. Before I started this I was doing three sets of 12 burpees and 3 sets of 12 swings for each hand. I did that for a couple of months or so.

Before that I was just doing burpees but I wanted to add something.

Then I read this article and thought I have to give it a try.

I take one minute rests between each set though… But I still get it all done in 20 minutes.

Great start to the day.

That’s awesome! I’d be curious to learn your end results when you complete the program. Feel free to post in the Kettlebell Training Facebook group too. Even though the challenge has been over for a while we still have people posting videos of their progress. The burpee is my favorite bodyweight exercise and excellent for cardio.