Day 2 of this 5-day challenge saw a nice decrease in weight from the previous day. The fasting remains the most difficult part of the challenge. Exercising and maintaining a diet seem easy in comparison. However, I feel myself starting to get hungry in the mornings. Between the hours of 12 pm and 2 pm seem to drag on as my stomach is begging for some food. 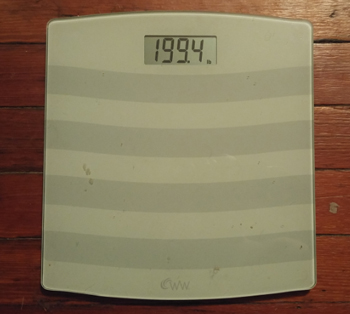 Just like that, I’m back under 200 lbs.! Granted it is by a slim margin but I’ll take it. That’s a drop of 4.3 pounds from the day before. It’s important not to get too excited. A lot of that is probably from *ahem* expelling most of those junkie foods from my body. No way would a pace like this continue. If that were the case, everyone would be doing this strategy.

One of the more deceiving kettlebell workouts I’ve discussed on Kettlebell Krusher is this kettlebell flow workout. Created by Onnit coach Eric Leija, the first set feels like a cakewalk. However, by the 7th and final set, your body and muscles will have that burning sensation.

As far as I’m aware, Eric is the originator of kettlebell flows. It is one of the best ways to get the most out of your workout in an allotted amount of time. That’s because flows chain several exercises seamlessly one after the other with no rest in between them.

This particular kettlebell flow workout features rows, cleans, swings, and a rack push press for a total of 7 kettlebell exercises in 1 set. Instead of the suggested jumping roping after each set, I selected a random card from Stack 52 Kettlebell Exercises and performed that exercise to fill out the 20-minute session. The picture below shows which 7 exercises I drew from the pile. 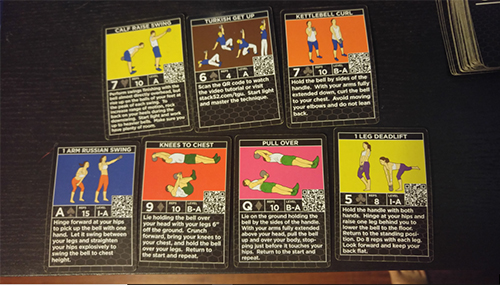 Waking up around 7 am and not eating or drinking anything (besides water) until 2pm takes a lot of mental toughness. The only reason I’ve decided to do this fasting method is because of the great results my wife has had from it. Even though I’m sleeping through a little less than half of that fasting period, it feels like an eternity before having something to eat.

My wife made 4 bottles of this breakfast shake. We each had one yesterday and had the others today. Whatever shake we’re having, it is usually planned for at least two days worth so that one less thing needs to be done in the evening. It still holds up well and tastes great a day later. 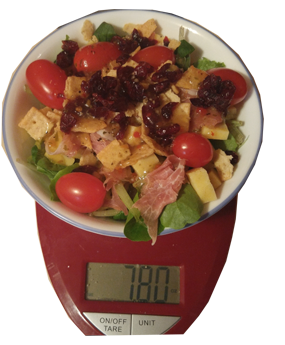 This was virtually the same salad as I had yesterday. It’s probably not going to change much throughout the week. It’s a little bit heavier, but I’m not trying to weigh it exactly the same each time. The one difference today is the cheese. Instead of cheddar it is cracked pepper. Both kinds of cheese are organic and come from a local farmer. 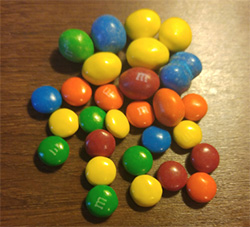 Still trying to get rid of this leftover wedding candy. There’s a goodie bag filled with various sweets to choose from. After today’s serving of mixed M&M’s it looks like there is about one more left. I think tomorrow I’ll switch to something else though!

One of my favorite meals, Restaurant Style Beef and Broccoli, was the selection for tonight’s dinner. I prepared the marinade the night before so it was just a matter of steaming the broccoli and boiling rice.

Yes, I know that rice isn’t Paleo. We tried it without the rice and it wasn’t filling enough. We also substituted for cauliflower but just couldn’t stomach it. So we agreed that for this meal, rice would be an exception to the diet. However, it’s not an insane amount of rice like you would get with take-out.

Swapping out those two ingredients doesn’t really alter the taste of the original recipe in my opinion. The aminos do a great job of emulating that soy sauce flavor and give the beef and broccoli that authentic Chinese food taste. 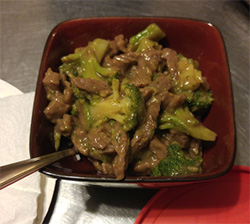 Beef and Broccoli with Rice

Same routine as the night before. 30 minutes of exercising on the stationary bike. I forgot to snap a photo of the calories burned but I know it was over 300 again. It was around 9:15ish when I got on. Later than I would have liked!

Similar to the other meals from yesterday, the dessert was the same. Two almond butter cups with some eggnog. Although instead of regular eggnog this was vanilla eggnog. Still from Hood, of course! It’s probably a good thing that it is only a seasonal treat. 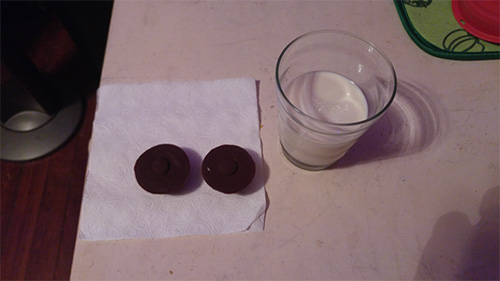 I’m happy with the weight loss from the day before. I chalk it up to a fluke, but it would be nice to drop even by a little bit tomorrow. I still feel very motivated throughout this challenge and look forward to reaching the mid-point.

Improve Stability and Balance With This Kettlebell Combo

Why Check Out A Supplement Review Website For The Best Brands?